COVID-19: Get your Booster Shot or the COVID Emergency Pill from CFFHAE.org

COVID-19: Get your Booster Shot or the COVID Emergency Pill at Center for Family Health & Education…
Important Medi-Cal Change: Medi-Cal now available to low-income adults over 50 years old, regardless of immigration status.  Please contact us for full details. 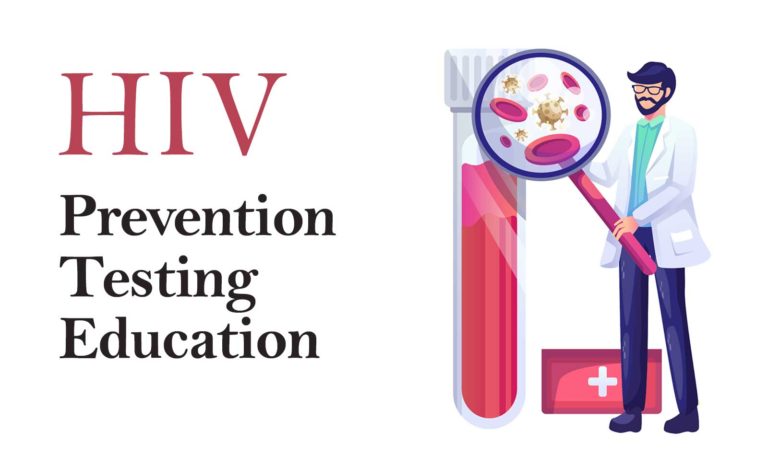 HIV (human immunodeficiency virus) is a virus that attacks the immune system.  The result is unfortunately a weakened immune system, and that person is then more susceptible to other diseases and infections.

“If HIV is not treated, it can lead to AIDS (acquired immunodeficiency syndrome).” according to HIV.gov

Although there is no cure for HIV or AIDS, there are treatments that enable people with the infection to live healthy, long lives.

Preventative measures for HIV include:

How HIV is transmitted...

“You can only get HIV by coming into direct contact with certain body fluids from a person with HIV who has a detectable viral load. These fluids are: For transmission to occur, the HIV in these fluids must get into the bloodstream of an HIV-negative person through a mucous membrane (found in the rectum, vagina, mouth, or tip of the penis); open cuts or sores; or by direct injection. People with HIV who take HIV medicine daily as prescribed and get and keep an undetectable viral load have effectively no risk of sexually transmitting HIV to their HIV-negative partners.”

Who is at risk for HIV

Anyone can be at risk of getting infected with HIV, however certain groups are more at risk to get infected.

According to the CDC:

“Communities. When you live in a community where many people have HIV infection, the chance of being exposed to HIV by having sex or sharing needles or other injection equipment with someone who has HIV is higher. You can use CDC’s HIV, STD, hepatitis, and tuberculosis Atlas Plus to see the percentage of people with HIV (“prevalence”) in different U.S. counties and states, as well as other data. Within any community, the prevalence of HIV can vary among different subpopulations.

Subpopulations. In the United States, gay, bisexual, and other men who have sex with men are the population most affected by HIV. According to CDC, in 2018, gay and bisexual men accounted for 69% of new HIV diagnoses. By race/ethnicity, Blacks/African Americans and Hispanics/Latinos are disproportionately affected by HIV compared to other racial and ethnic groups. Also, transgender women who have sex with men are among the groups at highest risk for HIV infection, and injection drug users remain at significant risk for getting HIV.

To learn about how COVID-19 impacts people living with HIV, click here

How to Prevent HIV 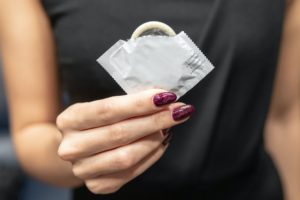 HIV/AIDS can be prevented with the usage of condoms during sex.  Be sure to practice safe sex to protect yourself and others.  For information and visual guides on how to use condoms, please click here.

In addition to condoms, there is now a daily pill that can prevent HIV, called PrEP.  Read below to learn more about PrEP..

Advancements in technology and medicine has led to the creation of a daily pill that helps prevent contracting and the spread of HIV.

According to Hivcare.org, PrEP is best for those who:

“1. Have an HIV positive partner
2. Have an at-risk HIV partner: 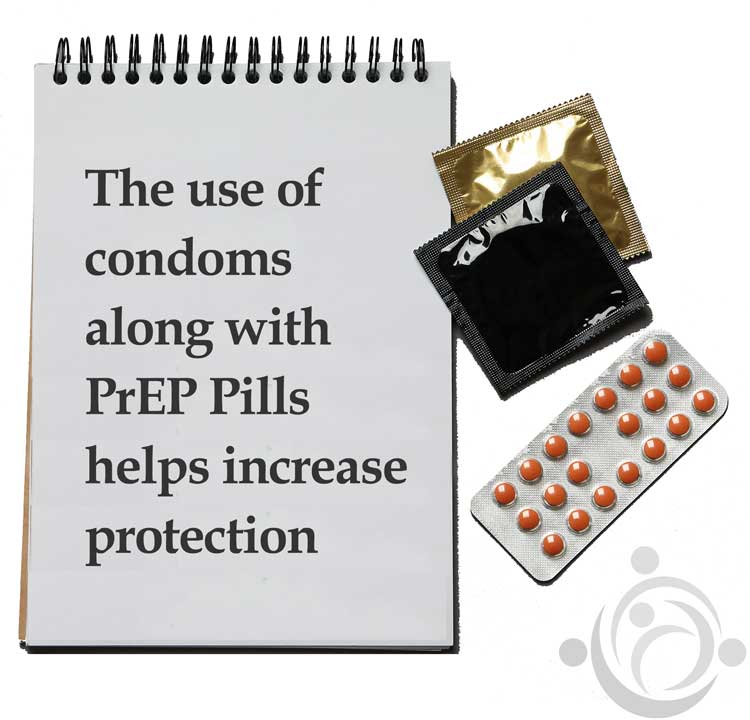 You should still always use condoms with PrEP pills.

Please note that Pre-exposure Prophylaxis (PrEP) is not designed for those that are already HIV positive.  Instead, it is meant for people who are at high risk for coming in contact with vaginal, semen, and/or blood fluids.

Ask your doctor or request an appointment with us for more guidance with PrEP.

Who Should Get Tested for HIV

Everyone between the ages of 13 and 64 should get tested for HIV at least once.”  -CDC.gov

Here is an even better reason: About 1 in 8 people in the United States who have HIV do not know they have it. (Hiv.gov)

Knowing your HIV status is important in protecting your longevity. and preventing spread.  If you feel that you are a higher risk individual, you should get tested more often.

Here are the Cdc guidelines for determining if you are high risk and how often to get tested for HIV:

“People at higher risk should get tested more often. If you were HIV-negative the last time you were tested, the test was more than one year ago, and you can answer yes to any of the following questions, then you should get an HIV test as soon as possible:

You should be tested at least once a year if you keep doing any of these things. Sexually active gay and bisexual men may benefit from more frequent testing (for example, every 3 to 6 months).” – Source: Cdc.gov/hiv 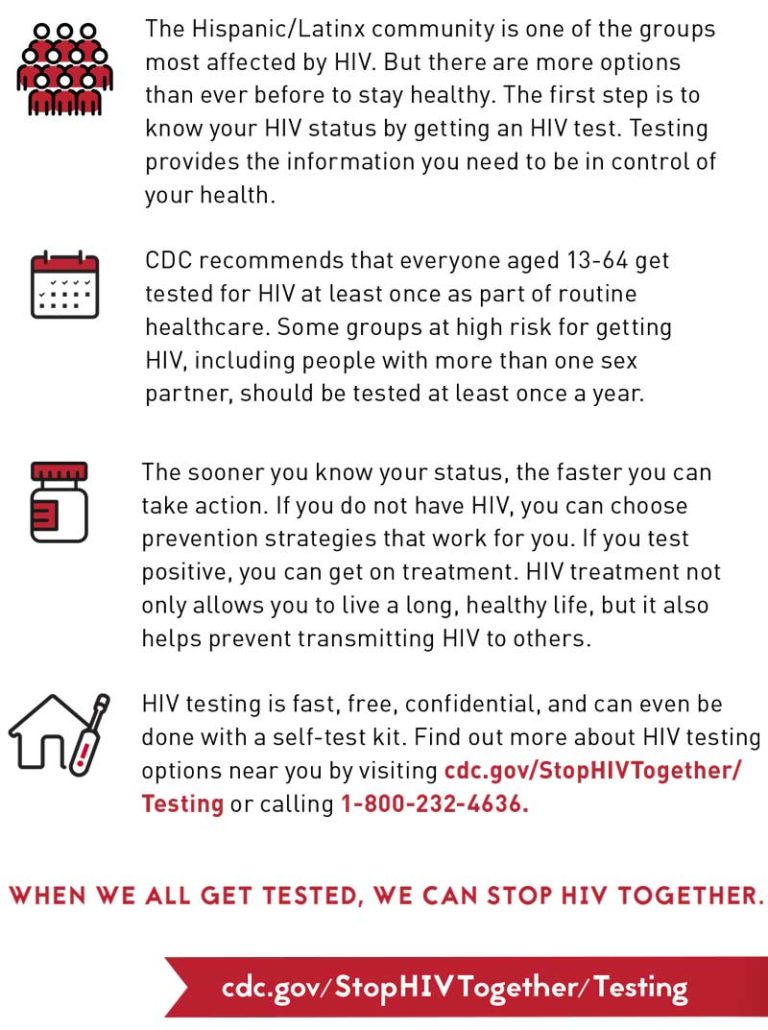 According to the CDC: “There are three types of tests available: nucleic acid tests (NAT), antigen/antibody tests, and antibody tests. HIV tests are typically performed on blood or oral fluid. They may also be performed on urine. Learn more about HIV testing at Cdc.gov/hiv

Understanding your HIV test results is easy!  However do keep in mind that no HIV test can detect infection immediately after exposure.

If you think you have been exposed to HIV in the past 3 days or 72 hours, you may be a candidate for post-exposure prophylaxis (PEP).

Most likely you do not have HIV.  The accuracy depends on the type of test taken, and the window of time between exposure and testing.

The time it takes for an infection to show positive in a HIV test, based on type of test:

Depending on your situation, you may be given a 2nd follow-up test to confirm.

If you test positive for HIV, there are HIV treatments that can reduce the viral load to nearly undetectable levels!  This means you will still be able to live a long healthy life, as long as you take the HIV medication to suppress the virus.

HIV treatment can also help reduce the chance of transmitting.

If you have been diagnosed as HIV positive, it is important to use condoms even if you are medication treatment.

To learn more about living with HIV, visit cdc.gov/hiv/basics/livingwithhiv

Notice:  The information contained on this page is for educational purposes only.  Cffhae.org is not responsible for in-accuracies or errors.  Please consult with a medical professional for guidance.

Any mention of, or the use of material from Cdc.gov, hiv.gov, hivcare.org, etc.. does not imply endorsement by these organizations.  We encourage visitors of this page to visit the links on this page, and we thank the Cdc and Hiv.gov for making HIV material readily available, for the good of public health education and raising awareness.

© 2022 Center for Family Health and Education.  All rights reserved.  This website is for informational purposes only.